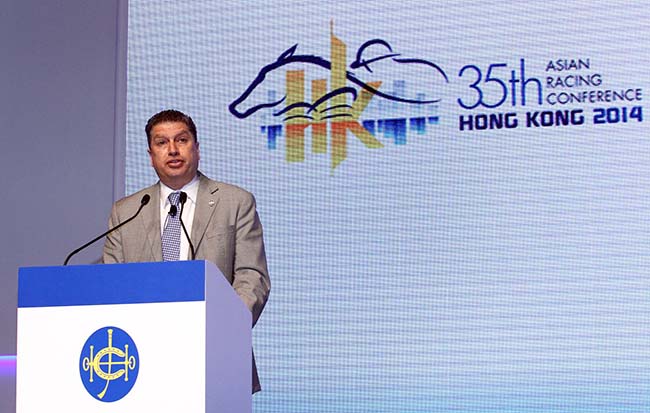 “I believe that the IFHA (International Federation of Horseracing Authorities) must move to a single worldwide set of rules relating to medication and we simply must find a way of ensuring that these rules can be enforced in all member countries,” said Mr Kavanagh, who was speaking in the context of ensuring the integrity of the Longines World’s Best Racehorse Rankings, and, by extension, all Pattern races.

“I realise that this is not straightforward in some countries,” he said, “but in order to have value and integrity for our global rankings and our black type system in sales catalogues, it is simply where we must go.”

A live electronic poll of delegates attending the session revealed that 82 per cent were in favour of standard medication rules being linked to the Pattern system.

Mr Kavanagh’s presentation, during the session titled: ‘The Pattern: Now and in the Future’ and delivered on the first morning of the 35th Asian Racing Conference, outlined the development of the Pattern race system since its conception in England in the1960s and its initial implementation in 1971 under the administration of the European Pattern Committee. He told those in attendance that the European Pattern’s pyramid structure achieves a balance in protecting the quality of races, with the total number of Group 3 races exceeding the number of Group 2 and Group 1 races combined, and Group 2 races outnumbering Group 1 contests.

Noting the marked increase in international competition over the past two decades, Mr Kavanagh highlighted that one of the fundamental aims of the IFHA is “the organisation of competitions to select the best horses in order to improve the quality of breeding.” He posed the question: “In this new global framework, how do we identify the best horses and the best races?”

He said: “Our Pattern systems and our sales cataloguing systems need to adapt to reflect our global business,” and noted that “there are too many races in the world carrying a grading which would not be justified under a single global ranking system.”

Mr Kavanagh pointed out that the ranking system has evolved internationally so that today a group of handicappers from 20 countries assess horses around the world and agree on ratings.

“The rankings are now published 10 times a year, which means that horse racing has a vehicle to promote the global rankings of its elite performers, the same as for other sports such as tennis, golf and Formula One,” he said, calling the Longines World’s Best Racehorse Rankings “a powerful marketing tool” on a global scale.

“These statistics suggest that there are not too many graded races in the world,” he said, while acknowledging that “the number of non-graded black type (Listed) races, which is more than double the number of graded races, may need consideration. A system of quality control is very important and this is done regionally at the moment.”

Mr Kavanagh also noted the innovative developments of major race days in recent years, such as British Champions Day, Irish Champions Weekend and The Championships in Australia, along with the Prix de l’Arc de Triomphe meeting and the Breeders’ Cup. He said that he believes the Pattern system accommodates these events appropriately.

“The Pattern is a regulatory mechanism, so it should seek respect rather than popularity,” he said. “It is very encouraging to see an increased desire amongst race clubs worldwide to upgrade the standard and value of their races and I believe that the Pattern systems worldwide have proven themselves well capable of accommodating such requests while ensuring that racing is developed in a structured fashion.”

He cited the success of the decision 10 years ago to extend the Pattern programme for older fillies and mares in Europe, and said that the European sprint programme could be next to experience a revamp.

“The European Pattern Committee has identified the sprint programme as an area of weakness and that is obvious to anyone who has looked at the World Rankings in recent years. There are a number of shortcomings in the sprint programme and it is significant that Ireland’s leading sprinter Sole Power has had his last 22 races overseas. We hope to recommend changes to ensure that better quality sprinters can be put in training and retained in training in Europe,” he said. “The Committee expects to conclude its work in this area by the middle of this year.”

“The European Pattern Committee exercises strict quality control over European racing. In recent years, the Committee has tightened its rules and made more downgrades than upgrades. Next year, a total of 46 races, including a number of Group 1 races, will be reviewed by the Committee, representing more than 10% of Group races run in Europe.”

Regarding the case for Super Group 1 races, Mr Kavanagh commented: “We get asked why we don’t identify a subset of races which reflect the elite races worldwide. While that is understandable, it would create practical difficulties. The Committee believes the focus should be on the world’s elite horses instead.”

He commented: “I think it is a good idea because there are 459 Group 1 races which is a big number. If you look at other sports and see how many tennis and golf tournaments there might be, we know which ones are the big occasions. We certainly know that in racing too and it is a question of recognising the elite races. Certainly, the 459 are not equal (in terms of quality) – we all know that. So it would good to recognise Super Group 1s, until we can really get the house in order by bring the number of Group 1s down by 10% or 20% over time. Whether we highlight 20, 50 or 100 races, we have a pretty good idea which ones those are and I believe they should be recognised.”

A majority of the ARC delegates in the Grand Hall of the Hong Kong Convention Centre agreed with him, with a live vote producing 59.6% in favour of the creation of Super Group 1s and 40.4% against.

Mr Nader, in his opening remarks, said: “The Pattern is an increasingly important part of our industry, as thoroughbred racing has rapidly evolved into a global sport. Today, more than ever, the quality control process in the grading and governance of major races must be rock solid, with consistency and credibility. These are basic requirements if horse racing is going to be taken seriously as an international sport. If you look at a one-page snapshot – country by country – of the number of Group 1 races as it stands today, it makes no sense. But it cannot be changed overnight. We are moving in the right direction but there is clearly an imbalance. We are taking steps within the Asian Pattern Committee to carefully review races as regards to upgrades and downgrades. South America accounts for 20% of the world’s Graded races, and to its credit, is taking proactive steps to address issues with quality control. In the end, a global balance needs to be reached. A very small percentage of the world’s races are Graded but we need to make sure, to the best of our ability using systematic methodology, that we get those races right.”

The session also featured a presentation on ‘the Strategy for the Development of Racing and Breeding in Saudi Arabia’, given by Adel Almazroa, General Manager of the Equestrian Club of Riyadh, who pointed out the growth of racing and breeding in Saudi Arabia. The number of foals born in 2013 was 1,473 as against 723 10 years previously, while there are also more races and higher prize money. To boost quality, a number of import criteria were introduced two years ago and the average rating has improved. There is now a three-year plan to boost quality further.