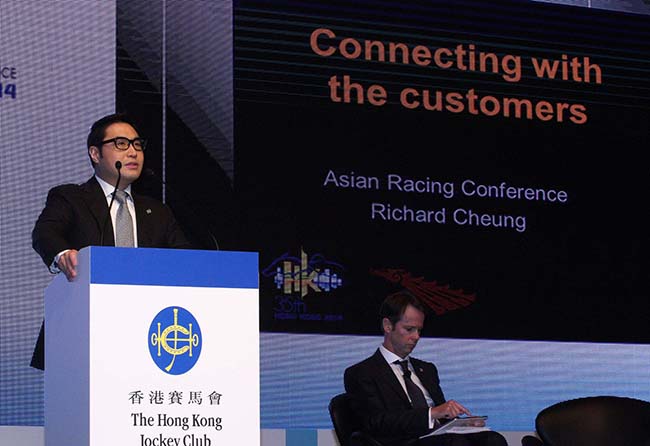 In the session entitled ‘Connecting with the customer’, ARC delegates also heard from Thomas Ascher, Chief Executive of Longitude LLC, Professor Lionel Ni from Hong Kong University of Science and Technology, and Scott Mcleod, the Digital Media Manager at Everton Football Club, which is widely-acclaimed for its social media work.

Mr Cheung, who chaired the morning’s session, outlined HKJC’s strategy that has successfully turned around a declining turnover trend and is succeeding in attracting new customers. He told delegates that the Club’s turnover dropped season on season from HK$81.5 billion in 2000/01 to a low of HK$60 billion in 2005/06. By 2009/10 that had grown to HK$75 billion but, he said, at that time 75% of the Club’s customers were aged over 50. He said racing in Hong Kong had a perception challenge to overcome as the younger generation considered it to be complicated and only for hardcore bettors.

Since then, the HKJC has followed a clear strategy of customer segmentation based on in-depth customer analytics of the Club’s current and potential customers.

“Our strategy starts with segmentation,” said Mr Cheung, emphasising that those segments are coupled with segment-specific levers to connect with customers. “We identified four levers: an ambient racecourse; digital connection; big-data innovation; and shaping racing as popular culture.” he said, with the result so far being growth in turnover season on season.

Mr Cheung highlighted the Club’s Racecourse Master Plan, with its widespread renovations and innovations targeted at each specific segment. He told attendees that the HKJC had engaged in a holistic approach with a clear aim to promote racing as lifestyle.

He said that for general race-goers the public areas have been upgraded, while “for Owners and Members we go for creating a luxurious venue experience and we differentiate between younger and older Members.” Mr Cheung also highlighted what has been done for what he termed “young and trendy customers,” saying that “adrenaline bar and lounge at Happy Valley and the stylish Hay Market at Sha Tin offer trendy experiences” in line with expectations.”

Mr Cheung also noted that “as well as great venues, the experience is the key” as he took delegates through a visual tour of the Happy Wednesday brand, a weekly event aimed at the 25-39 age bracket as well as an international crowd and tourists. Now one of Hong Kong’s most popular destinations, Happy Wednesday merges vibrant, energetic theme nights, live music and social media into the racecourse experience.

He reported impactful results in the young segment across all areas on Happy Wednesday fixtures since the initiative was introduced in the 2010/11 season, including attendance and food and beverage revenue.

Mr Cheung said that much of this success is connected to the digital experience and cited the Club’s popular Race Simulator App, the online availability of speed maps and an online Raceday Focus feature among other innovations. Gamification, he said, is also proving to be popular in engaging the next generation of customers, with the Club’s Racing Touch App particularly popular with its drag and drop interface. He also stressed the importance of making available real-time information to mobile devices.

He pointed out that the growth in turnover over the past four years has come from mobile. “Moving things from the PC platform to the mobile and tablet platform is a must for us and it constitutes more than 80% of our digital experience work.”

Big-data is also playing a key role in HKJC’s strategy, noted Mr Cheung who told delegates: “At the Hong Kong Jockey Club, we rely a lot on data-mining and that is a big advantage to us. We have identified customers’ changing needs and we know what they want.”

Mr Cheung said that information on customers’ betting preferences and demand had led to the Club initiating the Quartet bet, of which he said: “So far we are pleased with the results, with US$1.5 million turnover per race.”

Later in the same session, Scott Mcleod of Everton FC delivered a presentation entitled ‘Engaging through digital’, which provided an insight into the English Premier League club’s approach to digital media and how that approach supports the club’s wider goals.

He shared several case studies that showed how Twitter, Facebook and other social networks are not only tools for information delivery but also gateways to greater two-way communication with an audience.

Mr Mcleod said that in his experience at Everton, one fundamental of the process is to “understand the club’s goals and set digital targets based on those goals” and added that departments within an organisation must collaborate on any social media campaign so as to ensure that “every project is delivered as part of a joined up approach between online and offline.”

Thomas Ascher, CEO of Longitude LLC, took delegates on a journey through the technological advancements of the past 40 years that revealed the convergence over time of video, racing and the financial markets. He said: “Racing has a staggering head start on the financial markets because it doesn’t matter whether you want to watch Fox or Bloomberg or whatever your financial news network of choice is, they have nothing that is as compelling as this sport.”

Professor Lionel Ni, Chair Professor of Hong Kong University of Science and Technology, gave a presentation on Big Data and asserted that “Google knows you better than you do!” as he explored the value of data collection, data processing and data mining.