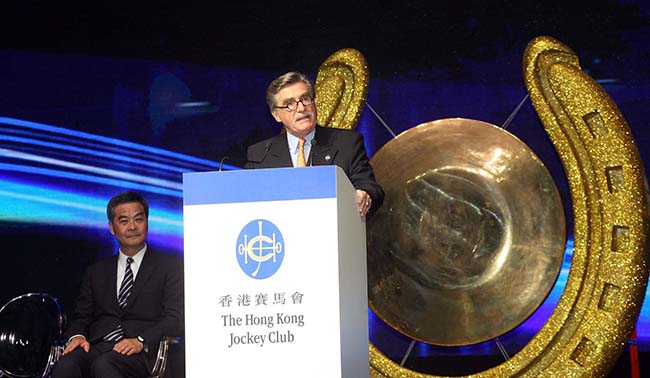 The regional flag of the Hong Kong Special Administrative Region hung proudly alongside those of the Asian Racing Federation’s member nations and regions as Hong Kong Jockey Club Chairman Mr T Brian Stevenson welcomed a record number of almost 800 delegates, as well as media and invited guests, gathered from around the globe. The guests included Mr Louis Romanet, Chairman of the International Federation of Horseracing Authorities and Mr Ingmar de Vos, Secretary General of the International Equestrian Federation.

Mr Stevenson spoke of Hong Kong’s “amazing vibrancy and blend of cultures” as he addressed those present ahead of what is the world’s largest and most significant horseracing industry conference.

“Horse racing is one of Hong Kong’s world-class brands but equally importantly its method of operation and structure is by way of a unique model of social innovation which benefits the entire Hong Kong community through the Jockey Club’s not-for-profit business model,” he said.

“It is very fitting that the ARC is being held here in Hong Kong,” said Dr Sato. “Hong Kong is one of the leading racing jurisdictions in the world. It is a global giant in terms of its wagering operations, it stages spectacular international racing events and it has a highly respected role as a major contributor to charity and to the community.”

The Hong Kong community was well-represented during the evening as those assembled enjoyed harmonies from a local children’s community choir, an energetic, flag-waving representation from Shaolin Kung Fu and a performance by musicians from the HKJC Scholarship Scheme.

“We are particularly honoured that this is the third time that Hong Kong has been chosen as the host city for the Asian Racing Conference, the last occasion being 1991,” said Mr Stevenson, who outlined the massive growth in Asian horseracing over the past 20 years and the rise to preeminence of the ARC.

“The ARC is now the largest racing conference in the world and is no longer just a regional gathering but is now one of the major forums and marketplaces for ideas for the racing industry worldwide,” he said. “This year's 35th event has drawn a record attendance of almost 800 racing officials, administrators, executives and leaders in various business fields from some 40 jurisdictions, all motivated to embrace a common global vision for the development of this great sport.

“Between our 21 (ARF) members we now run over 55,000 races a year, almost 40% of the total worldwide,” he said. “We generated US$75 billion of turnover in 2012, nearly 60% of all the money wagered globally on horse racing; and we have developed substantial breeding operations, foaling some 35,000 high-quality thoroughbreds a year, again close to 40% of the world total.  Most important of all, the ARF has become well-recognised for its innovative ideas, promoting the development of the sport.”

“The ARC is a global forum for industry leaders from around the world to meet together, identify emerging issues, and to develop new strategies,” said Dr Sato.

“This is an exciting time for racing. We do face some challenges, but there is also a great deal that we can be optimistic about.  By working together we are making great progress.  2014 is also the Year of the Horse, and that must be a good omen for our discussions this week.”

The three-day conference at the Convention and Exhibition Centre will consist of 15 seminars, featuring topics such as the future landscape for wagering, the use of cutting edge technology in sports broadcasting, the issue of drug control, the community impact of racecourses, and the international movement of elite horses.