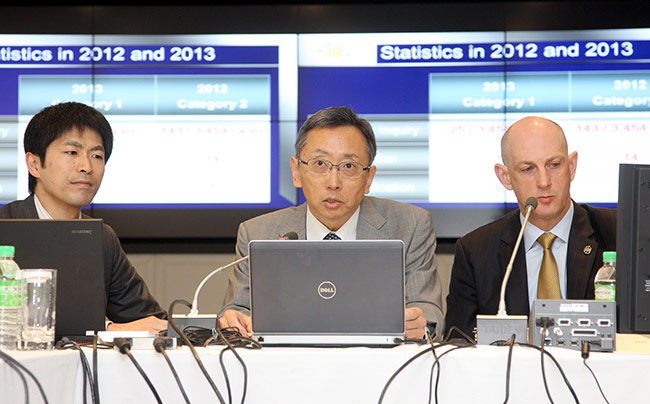 One of horseracing’s most important Rules is the protest/objection Rule, which until relatively recently was operated in several different ways around the world. This issue was highlighted at the 31st Asian Racing Conference in Dubai in 2007, since when great progress has been made to harmonise the Rule internationally, thanks to discussions held during previous International Stewards’ Conferences and meetings of the IFHA’s International Harmonisation of Raceday Rules Committee.

There was further welcome news on that front at the Stewards’ Conference today, when Mr Yoshihiro Nakamura, Chief Steward of the Japan Racing Association informed delegates of the results of a change to the protest/objection Rules in Japan that had taken place in 2013. The JRA had changed to the ‘Category 1’ philosophy which is widely used throughout Asia, Australasia, Great Britain, India, Ireland and South Africa.

Mr Nakamura reported that in 2012, there were 142 protest/objection inquiries conducted, with a change to the judge’s placings being made on 21 occasions. Of these 21 instances, 7 horses were disqualified as a result of being found to have caused interference which affected the result of the race, irrespective of where in the field the offending horse finished. By contrast, during 2013 there were just 25 inquiries with only one change to the result of a race. Further, there were no horses disqualified from a race for having caused interference.

Against the background of events in various parts of the racing world over the past few months, another significant discussion at the Conference was held on the subject of the level of penalties that should be applied to serious offences, including the use of anabolic steroids and issues relating to animal welfare. On that subject, the Conference was pleased to note a report from Mr Johan Petzer, Chairman of Stewards at Thoroughbred Racing South Australia, concerning the introduction in Australia of mandatory minimum penalties relating to offences involving prohibited substances and animal welfare.

Some of the other subjects discussed on a wide-ranging agenda were: the provision of information by Stewards to the public through mainstream media and the increasing use of social media platforms; a study currently being conducted in Hong Kong regarding the health, fitness and welfare of jockeys; rules applying in certain jurisdictions regulating or prohibiting medication/treatment being administered to horses on or leading up to the day they are to race; and the benefits of interaction between Stewards and Security & Integrity departments.

Looking towards the increasing internationalisation of racing, further presentations examined: the possibility for protest/objection hearings being conducted in a harmonised manner around the world; and the merits of having jurisdictional gear/equipment registers to assist connections given the ever increasing movement of racehorses between countries.