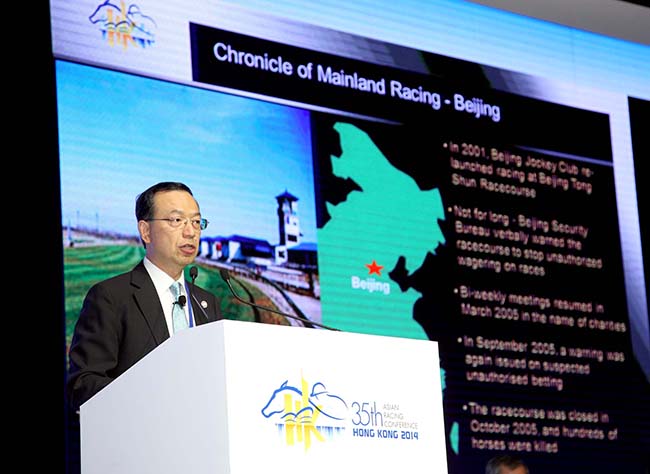 The first of these sessions, chaired by Asian Racing Federation Chairman Dr Koji Sato, commenced with an overview of horseracing in Mainland China over the past 20 years, presented by Dr Kim Mak, the Hong Kong Jockey Club’s Executive Director, Corporate Affairs, summarising the key racecourses and racing clubs that have emerged, and in some cases subsequently closed. And Dr Kyo Shimizu of the JAIRS Registration Department told attendees about the need for education in China regarding thoroughbred registration.

“The future Chinese racing development needs more international support, and support from the Hong Kong Jockey Club and from the Asian Racing Federation,” she continued. “We sincerely welcome friends from around the world to cooperate with us to jointly promote the prosperity and development of Chinese horse racing, the industry and horse culture.”

Madam Tian spoke of the Chinese Government’s approach to the international development of horse racing and outlined the official structure under which horse racing is organised in China, with the sport coming under the jurisdiction of the China Equestrian Association, the officially permitted body under the auspices of China’s General Administration of Sport (GAS).

“The sport has already become a key project in the development of Chinese sport and has gathered support from the government,” she said.

“The CEA aims to enhance the regulatory and technical standard of Chinese equestrians; promote the link among all members and deepen the friendship between the CEA and equestrian associations from around the world, and cooperation with the ARF and other international associations,” added Madam Tian, who also told delegates that China would wish to engage with the industry to improve infrastructure, including the training of participants.

Professor Han Guocai, Vice Chairman of the China Horse Industry Association looked at the history, current situation and future outlook for the horse industry in China. He told delegates that China had 29 indigenous breeds; 13 new breeds since the 1950s and 10 imported breeds, including about 3000 thoroughbreds, of which about 400 had been registered in the China Stud Book. He noted that China had 16 racetracks with sufficient facilities to host horse races.

He said: “We would like support from the international racing community; help to organise races and integrate the resources of owners in China with international organisations; we are keen to learn, to upgrade, to improve; and we want to contribute to horseracing in China and the world.”

At the session, Dr Chris Riggs, HKJC’s Head of Veterinary Clinical Services, gave attendees an insight into the equestrian veterinary landscape in China.  In outlining the current challenges, he noted the lack of qualified vets, their low status in Chinese society, and the dearth of necessary clinical facilities, as well as the absence of drugs, and the regulatory restrictions that hinder the involvement of overseas vets.  But he also noted some positive developments, including among other things, the commitment of dedicated young vets on the ground.

“The Hong Kong Jockey Club has a genuine wish to support horse welfare in Mainland China, develop relevant skills and share our skills and knowledge,” he said.

Hong Kong Jockey Club Chief Executive Officer, Mr Winfried Engelbrecht-Bresges, chaired the second of the final sessions at which he said: “We had a very open and fact-finding first session where we should note that the equestrian industry in China was calling on us to assist in their development.  It’s important the ARF helps China in establishing a regulatory framework with a major focus on building capabilities in China,”

HKJC Executive Director of Racing, Mr William A Nader, updated delegates about the Club’s ongoing Conghua training centre development; “This is one of the biggest projects in the history of the Jockey Club.  Our training centre at Conghua has one purpose: to sustain and support the great racing that we enjoy in Hong Kong.”